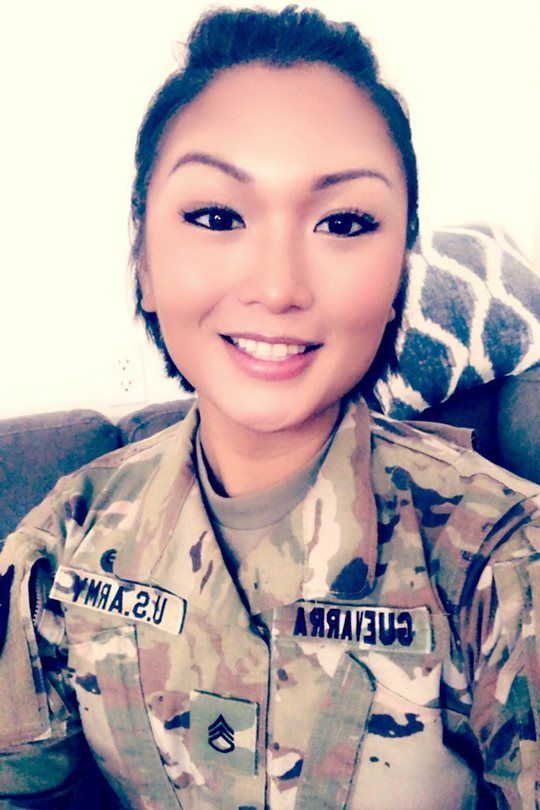 Homeless in Lawton, Oklahoma at the age of 14, Adrianna Guevara needed a way out.  It would be several more years before she could join, but she knew the military offered a stability she hadn’t known.  She said that joining the Army gave her “…a roof over my head, food in my stomach, a stable paycheck, a way to pay for college, and a way for me to strengthen my character.”  Once in, she was a quick study and rose through the ranks rapidly, reaching Staff Sergeant (E-6) as a Signal Support Systems Specialist in only 5 years.

Recently promoted to Sergeant, Adrianna was sent to Schofield Barracks in Hawaii and attached to a brand new company in the Field Artillery unit as a Senior Information Non-Commissioned Officer.  It was a position well above her grade, but she had confidence she could do it.   For the first two years, she did just that and built a strong record of performance in her unit.  Little did she know a problem lurked in in the Company rumor mill.

Like most transgender people in the military, Adrianna served in silence before 2016 and protected her identity even while taking every opportunity she could to express herself as the person she truly was.  Somehow, a Platoon Sergeant in her Company got a hold of a picture of her presenting herself as a woman and spread the picture throughout the organization without telling her.

When Secretary of Defense Ashton Carter announced the end of the ban on trans service, Adriana was ready to come out and begin a transition.  First, she had to tell her command even though she was scared of what might happen to her military career.  She started by requesting a meeting with her First Sergeant and told him everything.  Surprising to her, he was unsurprised.  He told her that he already knew because of the picture that had been floating around.  Adrianna was not only embarrassed, she felt betrayed.

Though nervous about confronting the offending Platoon Sergeant because of their rank difference, Adrianna summoned the courage to speak with him.  To her surprise, he apologized and stated that he really hadn’t thought it was an issue, but the damage had been done.  Adrianna’s ability to influence the narrative about her had been lost.

Adrianna spent the remaining two years of her military service working hard to repair the damage to her reputation through her commitment to the mission.  During her transition she went to see a therapist on a regular basis to take care of her mental health, but would always ensure her work was complete ahead of those visits.  Despite that, her Commander counseled her on his perception that she was asking to be treated like a ‘special case’.  Adriana stated “I did everything so that I wouldn’t get special treatment. This fired me up even more.”

Over the next three months she completed a special project to re-invent the Company’s Information System Program, managing $1.5 Million worth of computers and radios.  Several people senior to her failed to achieve a needed security certification, but Adrianna got it and filled in as a higher privileged admin to ensure her unit accomplished its mission.  She gained her Commander’s respect and her program was rated “Best in Division”.

Adrianna was honorably discharged from the Army in 2018 and is now pursuing a degree in Computer Science and Software Engineering at Oregon State University.  She said “I survived don’t ask don’t tell, I survived being trans while serving, and I did this with high merits and an honorable discharge. Being a veteran (now) means that I fulfilled the duty that I was called upon to do for this great nation.”

Q & A with Adrianna Guevarra

A: In the face of adversity, I try to surround myself with a community that is filled with love and compassion. I talk with these people and I get to vent with these people, which allow me to organically express my frustrations.

A: I want to let people know that transgender members of the military should not be judged externally but be judged on their merit and their character.

A: I think the best way that allies can show support to the trans military community is by echoing our voices when we are not able to speak.

A: I have a passion for Software Engineering and one day I hope that I can develop Software that will help SPART*A and the rest of the trans community all over the world.