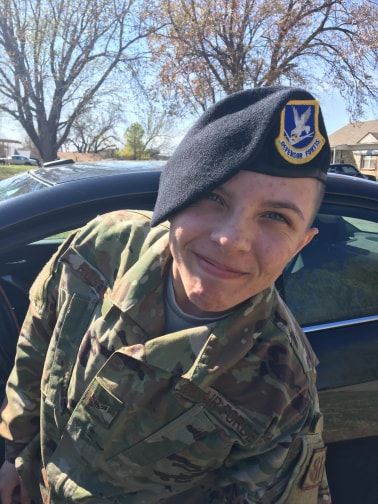 "What is that? A guy? A girl?" Airman 1stClass Mason Rogers kept his head down and his mind calm as he let it wash right past him.  The calls kept coming.  "Hey! Are you a guy? Are you a girl? What are you?"  Similar incidents occurred all the time before he joined the Air Force, but this time was different.  His friends were with him and had his back.

Mason had just completed basic training and was in technical school to become a security forces Airman.   The rules in tech school are slightly relaxed compared to basic and Mason had the opportunity to again wear civilian clothes off-duty.  His wardrobe was decidedly causal, distinctly male, and comfortably his own.  He had been living as a male for the year prior to joining the Air Force, but had to enlist under female standards.  His fellow students noticed, but they all just called each other by last names and they kept their questions to themselves… for a while.  When the questions began, Mason decided to tell them that he was transgender one at a time.  Each Airman told Mason that he had their full support.  Mason’s friendships paid off, because it was his fellow trainees that looked out for him when the cat-calls came.  They were at his side every step and made sure he was OK all the way through the course.  After graduation, Mason moved to his first duty station, Tinker Air Force Base, where he discovered that it wasn’t just his friends that were going to give him a hand.

Growing up, Mason had always wanted to be an Air Force cop, and he had just achieved that.  But now there was something more, it was time to be himself.  Expressing who he was only outside of duty hours wasn’t allowing Mason to grow and develop into the best Airman he could be, but he was scared.  He didn’t want to lose what he’d already achieved and the thought of transitioning warred with his desire to remain in the Air Force.  Luckily, it wasn’t an either/or decision.  6 months after his arrival at Tinker, Mason worked with his leadership to begin the process of an in-service transition.  As he prepared paperwork for his commander’s approval, he was shaking and wondering what would happen to him and his family, but he sent it forward.

A few days later, Mason received approval to attend a week-long evaluation with Air Force medical personnel in San Antonio, but it had a note on it that made his heart race: his commander wanted to meet with him before and after the trip.  Mason feared the worst, but was about to find another ally.  In the meeting, Mason’s commander was attentive and asked questions that would help him understand the process that Mason was going to go through so that he could better help Mason get through it.  They covered a wide range of topics, including how Mason was fitting in and making a difference in the unit.  Leaving his office, Mason felt accomplished and comfortable.  Was it really going to be this easy?

Though Mason knew his leadership would back him up every step of the way, when he got word of the new ban going into place in April 2019 he rushed to complete as much of his transition as he could.  The fear that his dream could be taken away was back, but Mason wouldn’t let that stop him.  Since then, he’s worked with his unit to pull together an information repository in case there was another trans Airmen in the unit at some point.  Mason is also planning to start working on a degree this year and expects to spend at least 6 years on active duty prior to undertaking another transition, but this time just moving to the Guard or Reserve so that he can move to Washington State and continue his service.

Q: Why did you join the military?

A: I joined in November of 2017. I had just finished my first year of college. I was going for a bachelors in homeland security & terrorism but couldn't afford to go back for a second year so I decided to enlist.

A: My professional goal in the military is becoming a fully qualified security forces Airman. I'm also on track to start my Community College of the Air Force (CCAF) degree this year.  After finishing CCAF, I hope to finish my bachelors in homeland security. Eventually, I hope to start a career with border patrol/customs.

A: I look back on the hardships that many communities have faced and look to them for additional strength. In the face of whatever they were going through they remained strong and pushed forward. I also have a large amount of support. My family and friends have always been there. They can always be relied on when I need picked up. My support from leadership makes all the difference also. Going into work knowing I'm supported makes me feel proud and worthy of serving. They all give me strength.

A: Transgender members of the military are capable. We are given standards and either meet or exceed them. We don't weaken the military. We provide support in every area. We are intel, medical, mechanics, security, and so on. Being transgender doesn't play a role in what I do for my job. We all wear the same uniform and are held to the same standard.