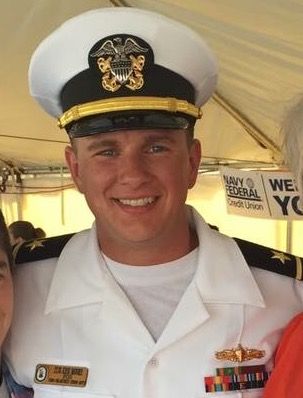 Maybe there was something about Navy Lieutenant Kris Moore that was more obvious to the outside world than it ever was to him.  When Kris joined the Navy, his recruiter told him over and over again not to admit that he was gay.  It seemed odd to Kris because he didn’t identify as a homosexual, so why was this person so adamant that he not tell anyone.  Since it was still the era of Don’t Ask, Don’t Tell (DADT), Kris wondered if this was boilerplate messaging from the recruiters to prevent them from losing one of their folks, but it seemed like more than that. Perhaps it was portentous, because by the time he reached ‘Master-at-Arms’ A-school, Kris realized he was attracted to women which was a difficult pill for him to swallow.  Over his next few years Kris came to terms with his attraction, but Don’t Ask, Don’t Tell was still in effect and he took his recruiter’s advice to heart because he loved his Navy life.

Kris excelled in his Navy career and earned am appointment to the Naval Academy. DADT was repealed during his plebe (freshman) year and took effect as his sophomore year began.  The relief was palpable, but Kris was still cautious.  Along with a group of friends, Kris founded the first LGBT relations club, Spectrum, at the Naval Academy. The club brought in guest speakers to educate people on a number of topics, including what it means to be transgender.

Once again, what the outside world saw didn’t line up with Kris’ internal thoughts. During his junior year, his fiancé at the time asked him if he thought he might be trans.  He had to think about it for a bit, but it started to click.  Maybe that was it and the recruiter had been wrong all along… he was straight after all, he just happened to be male.

It was 2013 and Kris took the next year to figure out how he was going to handle coming out as trans, because open service wasn’t yet on the horizon.  He came out to his roommate, close friends, and immediate family just before graduation in 2014 but knew the time wasn’t right to come out to the Navy.  He decided not to pursue transition until he had established a strong reputation on his ship so he spent his first year as a Surface Warfare Officer learning his role and working on his qualifications.  It paid off.  In August of 2015 he came out to his doctor and his commanding officer (CO) which was followed by an announcement to the ship’s officers.  Kris recounts the conversation as follows:

*Edited for brevity
CO: And now First has something to say.

Kris: <extremely nervous, ringing his hands, bright red and noticeably sweating> “When I say transgender, does everyone know what that means?”

CO: They don’t live under a rock, get on with it.

Kris: <said with voice and hands shaking> OK, so I’m transgender. I identify as a male but was born female. I began hormone therapy this last week to assist with my transition. I just wanted to get everyone together to get it out in the open. Everyone will begin to see and hear changes very soon and I’d rather be upfront then have a bunch of rumors or confusion going around amongst the wardroom, mess, and Sailors. Any questions for me?”

*dead silence for a few moments*

Chief Engineer: Are you happy?

Chief Engineer: Then who cares what anyone else has to say?

Almost all of the officers in the room shook his hand, patted him on the back, and some even gave him a hug.  Kris was shocked, relieved, and almost in tears with surprise as to how well it had gone.  Not only did Kris never have a single issue with anyone on the ship, his performance continued to speak for itself and was recognized by a follow-on assignment back to the Naval Academy to teach leadership and be responsible for over 150 midshipmen.  Kris remains in awe of the support his was shown by his community on the ship, but he remains concerned that his experience isn’t always the case for others.  Kris says “We’re Navy (Army, Air Force, Marines, Coast Guardsmen) first.  Why should it matter if we’re trans?”

A: In 2004 I graduated high school in Boise, ID and began hanging out with a crowd with very little motivation.  I realized that I was quickly falling in line with their irresponsible behavior so, as we were out shopping one day, I asked my parents to go with me to the recruiting stations. My folks were EXTREMELY happy to oblige and we hopped in the car right away. I joined the military in 2005, at 18, to create a better life for myself and to serve my country. I desired access to free education and a steady career where I could learn about myself and the world.

I remember wanting to join the military since I was in the second grade, back then I wanted to be a fighter pilot (thank you Top Gun and the Discovery Channel Carrier series) but I lost motivation somewhere in high school. But I believe that there is such thing as a true calling in life and the Navy is exactly that for me.

A: Ideally, I wish to serve 20+ years and command a warship at sea. If I can stay in longer that would be great, but I don’t really know what my goals are beyond command at sea. I want to continue to grow as a leader so I can provide the best guidance and training to my Sailors. I enjoy education so on my shore rotations I hope to continue to teach classes at the Naval Academy, ROTC units, training and education commands, or something similar. I’m also very interested in mentorship so I try to help other service members with their careers by giving advice or resources, coaching them through situations they are in, and just showing that I support them through their struggles.

A: I stay resilient by focusing on the task at hand and reevaluating my goals or mission. In regards to overcoming adversity related to being transgender, I like to think about how far we’ve come, the thousands of other current service members that need each and every one of us to succeed, and the countless ones yet to come. And, not that I’m a stoic at all, but I find solace in one of the principles of stoicism—basically, worry doesn’t get you anywhere, focus on the things you can change, and let go of the things you can’t. If we look at the big picture, we often see that we can’t change it by ourselves, so I try to dig deep and figure out a small thing I can work on and try to help the situation that way.

A: The most important thing for people to understand about transgender service members is that we (for the most part) identify as Sailors, Marines, Airmen, Soldiers, or Coast Guardsmen first… we just happen to be trans. I can’t speak for everyone, but I want to be judged based on my work ethic and leadership, not on how I identify. I want to spend my energy doing my job to the best of my ability, taking care of my Sailors, and ensuring my ship is battle-ready at all times; I don’t want to waste energy worrying about my job security.