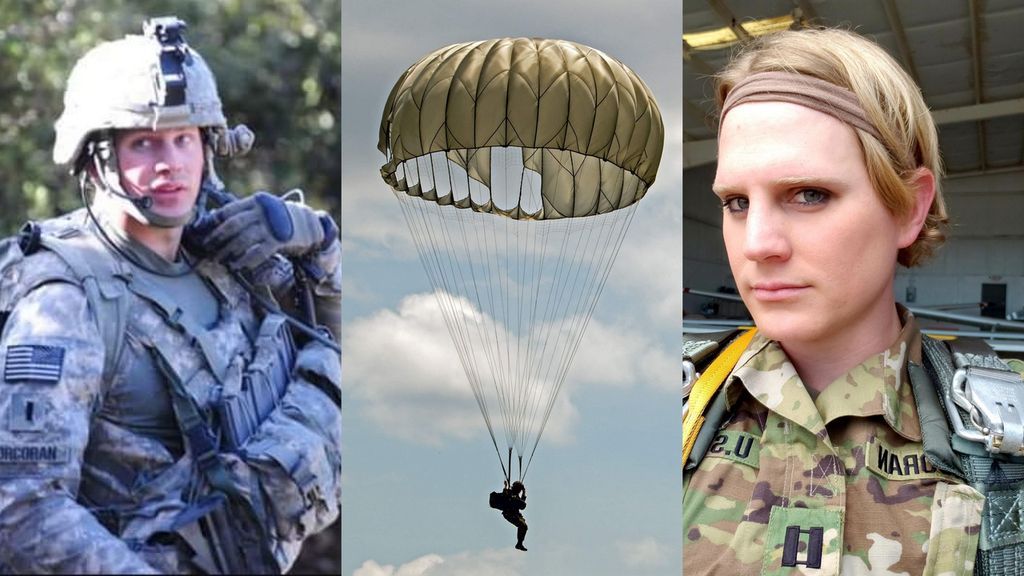 Listen to enough stories from transgender veterans and you’ll begin to hear themes emerge.  Major Kara Corcoran’s story shares some of the most common: self-discovery, flight into masculinity, an extremely challenging transition, and a better life in the end.   There’s one huge difference in Kara’s story compared to transgender vets of the past; she neither left the Army nor was forced out to transition.

At a young age, Kara had the feeling that something wasn’t right with her body, but everything society had to say told her it was just as it should be.  It wasn’t until exploration on the internet while attending Norwich University that she learned transgender people exist.  She was in the Corps of Cadets at the time and though the notion of being trans struck a chord with her, it wasn’t anything she could countenance at the time.  She fought it, overcompensated, and threw herself into the profession of arms.  She earned a reputation as an alpha male, someone who was dominant, impulsive, and ruthless.  Still, her drive for success, skill with tactics, and high fitness level earned her a commission into the infantry.  Shortly after, she met her future wife, graduated ranger school, and led a platoon through a very eventful deployment to Afghanistan.  Through it all the chance to live as her authentic self was speaking to her from the back of her mind, but the risk to career and profession was too much to listen.

A year after returning from Afghanistan, Kara began to explore her gender identity and began living a double life due to the ban on being trans in the military at the time.  On the occasional weekend Kara could be herself, but on duty she was the same successful male Army infantry officer she had always been. Transition was still just a far future concept due to the ban, the exclusion of women from direct combat roles, and family challenges.  Kara again pushed her identity to the background and consumed herself with the Army.

Over the years, the voice in her head proclaiming who she really was grew louder, and the consequences of coming out on a professional level had been greatly reduced with the implementation of open service. In 2018, the female voice in Kara’s head became the voice coming out of her mouth.  She told her pregnant wife that she needed to transition and planned to do so once her daughters were born, but her plans sped up in concern that her window was closing. She knew the new ban on transgender service put in place by the Trump administration would prevent her from coming out if she didn’t do it right away. Without transition, and the authenticity that goes with it, she feared there was no way to be an effective senior officer.  Kara questioned all of the things she would be willing to lose by coming out, but knew she had to take the risk.  She almost lost everything.

When Kara came out to her unit reactions were mixed and often born of ignorance, but her advantage was that her chain of command was in her corner.  They saw the soldier, not the gender.  The biggest blow occurred when her family left.  Kara was devastated and saw her life quickly shatter.  Depression settled in for a lengthy and unpleasant visit that took her to some very dark places. Trouble in her personal life spilled into her professional life and nearly forced her to leave the Army  she loved so dearly.  She credits her parents, close friends, a few transgender service members, and her dog for pushing her to hang on through the turmoil.

A few months later Kara got the opportunity to see her family for a few days and discovered that she and her wife had refused to give up on one another, there was still love between them.   Kara also put on the service uniform fitting her gender, mentored a few junior female infantry lieutenants, and paid her first visit in a decade to a Catholic Mass.  Through these events, Kara found a renewed sense of purpose and of self.  She rededicated herself professionally and the support of her unit grew exponentially.  Leaders, peers, and outstanding non-commissioned officers put their names and reputations on the line for her, a transgender soldier, as she fought to regain what had once been such stable footing.

With regained support, Kara’s performance rebounded and her troubles dissipated.  In July 2019 she received orders to attend the prestigious Command and General Staff Officers Course and was promoted to the rank of Major.  She put her financial house in order, found normalcy in the life of a soldier-scholar, threw herself into a challenging fitness routine that led to completing her first marathon, and most importantly, reconnected with her family.  This past month, her family settled back in with her in Kansas where they happily raise their twin daughters.

Reunited with her family and re-energized about her future, MAJ Corcoran is serving as the senior-most female infantry officer in military. She aspires to set the example for combat arms women, be a transgender advocate, and to mentor those up, down, left and right of her.  She knows it was a narrow escape for her to make it to this time and place and said “When you’re in the deepest, darkest place, rarely does one make it out alone.”

The risk Kara took paid off.  Through transition, as challenging as it was, she found that better life that so many veterans sought by being their authentic selves. Kara counts her blessings that she gets to live it while proudly serving in the Army.

Q & A with Kara Corcoran

A: To serve my country.  My parents taught us the values of honor, pride and patriotism.  Now the Army is a family business. I graduated from Corps of Cadets at Norwich University, VT with a Civil Engineering degree and commissioned as an Infantry Officer in May of 2008.

A: My #1 Goal is to be an Airborne Infantry Battalion Commander and then retire.  Post Army, my aspirations are to work in Emergency Management.

A: Positivity, Purpose, and People.

A: First and foremost, judge someone by their character, competency, and commitment.  Do not judge by color, ethnicity, religion, sexual orientation, or gender.  We are all human.  Judge us based off our actions

Also know that transition is difficult.  Physical, Mental, Emotional, and Spiritual health are all interconnected.  Please understand that when a service member transitions they are filling massive void in their health.  I cannot begin to describe how much more productive they are after transition.  We are all over the world, deployed, and within your ranks.  We serve to serve.

Lastly, start with the "Golden Rule" but end with the "Platinum Rule," treat others as they wish to be treated.

A: Stick up for us and take care of us as if we were your brother, sister, mother, father, son, or daughter.  We are a family.

Q: Anything else you want people to know?