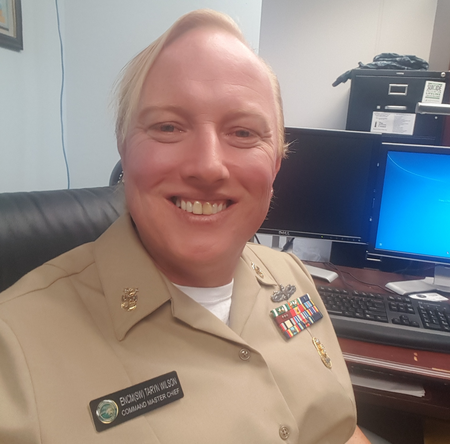 On a steamy summer night in 2015 aboard the USS New York, sailing through the Red Sea, Master Chief Petty Officer Taryn Wilson climbed up to a secluded part of the superstructure at the aft end of the ship. It was pitch dark, with only the starlight to guide her. No one ever went to this part of the ship at night. She was totally alone with her thoughts.

Taryn sat precariously atop the bulwark, her legs hanging over the side, asking herself “Should I just lean forward and let go?” It wasn’t the first time she’d been perched up there asking the question and it wouldn’t be the last. She hovered between life and death, 50 feet above the water. Taryn was sure that the fall would instantly knock her unconscious so the lookout wouldn’t hear or see a thing as she silently drifted into the darkness. But time after time she’d find a reason to hang on.

The reason Chief Wilson considered ending it all wasn’t anything new, it was a demon she’d been wrestling with her entire life. She enlisted in the Navy right out of high school in 1995 seeing it as an opportunity to get out of the small ski town of June Lake in the Sierra Nevada mountains. She wanted to learn a trade and the Navy would give her a chance to be a mechanic on something a lot bigger and more powerful than the cars she grew up working on. She had one more reason to join, she thought it was a way to get away from the feeling that she just wasn’t like the young men she’d grown up with. Maybe the Navy would finally make her the man everyone was sure she was.

It was only when one of her peers finally noticed something just wasn’t right with her after those long nights on the New York when she finally admitted to herself that she needed to stop fighting and come to terms with the thing she had hoped to leave back in the mountains of her childhood. She wasn’t the man the Navy and everyone else in her life thought she was, she was a woman, and it was time that the rest of the world saw that too. She let it all out to her friend, who to this day she credits for saving her life, because she never again considered visiting that ledge.

Her time at sea complete, Taryn was assigned to serve as the Command Master Chief for Naval Support Activity in Panama City, Florida where she is currently serving. In 2016, when the ban on transgender service in the military was lifted, she decided to take the plunge and live life authentically while transitioning on Active Duty. She knew her position as a Base Command Master Chief would leave little room to be private with her transition and came out publicly to her base in January 2017.

Since coming out, Taryn has never been closer to her Sailors. When she came out she asked for acceptance. Instead, she got far more: respect, love, and leadership opportunities she never expected. In the days and weeks following she had people come out to her and share their lives on a personal level, had peers reach out for advice, and had a sailor she’d never met email her looking for mentorship on LGBT issues because her story was so inspiring. Through her transition at the peak of the enlisted ranks, she never lost the trust of her sailors and she gained even more as her authentic self.

Taryn is very active in the community and now volunteers with passion instead of because it was expected of her. She serves on the PFLAG Panama City Board of Directors as the Transgender Outreach Coordinator, organizes and runs Panama City’s only Transgender Support Group, assisted in opening the Panama City Free2Be youth center (the only LGBT+ youth center in the FL Panhandle), and was recently tapped to serve on the TransAction Advisory Board and to be a member of the Florida Transgender Alliance as a Governor.

In August 2018, Taryn is looking forward to retiring after 23 years in the Navy and traveling for a month or two with her girlfriend before running head first into a second act of LGBT+ advocacy. The joy in life she now radiates would never have been associated with the dour Sailor of years gone by. Before the transition she created an inclusive culture on all the teams she led… for everyone but herself. Her teams performed well, if they hadn’t she’d never have come close to being a Master Chief Petty Officer, but now they’re more than a team. They’re family. 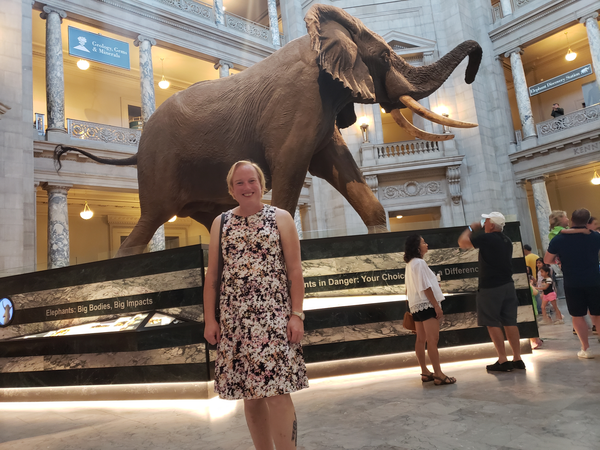 Q & A with MCPO Wilson

Q: What are your career goals?
A: My most important compass for my career has always to treat those around me, especially my Sailors, like they are family. When you do the simple thing of letting them know they are valued, respected and a part of a family they will be there for you when you need them most and your team will succeed.

Now that I am at the tail end of my career, the biggest goal I have is to show my peers that transgender service members serve at all levels of leadership and we have been for decades. After retirement I look forward to taking a few months of time for myself and then jumping in with both feet, unencumbered by the restrictions of the uniform, into advocacy work in the not only the transgender service member realm but the community at large.

Q: How do you stay resilient?
A: I do three things -

It’s not all roses all the time but you cannot get stuck in (a negative) mindset. That led me to some very dark places many times over the last 20 years (before coming out); you always have to look for an upside!

Q: What is one thing you want people to know about transgender members of the military?
A: We are service members like everyone else. We come here for many reasons but they are the same as our cisgender counterparts. We are here to create opportunity for ourselves and our family and above all we are here to serve our nation! We did not appear when the ban was lifted, we have been fighting in the trenches since the revolutionary war. If the ban were to be reinstated we will remain even if it is not openly as we always have.
WE ARE PATRIOTS!

Q: What can allies do to support the transgender military community?
A: The biggest thing I can ask of an ally on a day to day basis is to have our backs, even when we are not around. Because I am well known, there are many people that work on base who talk (about me). I am blessed that I have some really great allies that stop the rumor mill when I’m not around. It means the world to me to know there are people that have my back for no other reason than it is the right thing to do.

Q: Anything else you want people to know?
A: This (situation) is a lot like when Don’t Ask, Don’t Tell was repealed. Not everyone got onboard overnight. I remember hearing a lot of really bad stuff about our gay and lesbian brothers and sisters. The senior most of them took a lot of hate and disrespect. They showed their peers through being professional that they belonged, while the E-5 to E-7 and mid-grade officers saw their good example and flourished into leadership positions as the senior leaders retired. They then set the example for the junior most gay and lesbian service members and now as those service members are coming into their own as leaders. It took years to get to this point for them and it most likely will for us too. There will be trials and tribulations. We will persevere, but we must stay strong to adversity.

Last, if by sharing this story I get just one other person to live life authentically I will be forever happy that my personal demons brought them some happiness. I wasted so much and missed out on a personal life because I was scared. Had it not been for the roll back of the transgender ban I would have retired as a 30-year Master Chief, maybe, who hated the world. Now, because I was willing to embrace who I am and no longer be ashamed I will retire happily with someone I love very much. I can only speculate where I would be today had I not had to put all that effort into hiding who I am from everyone.