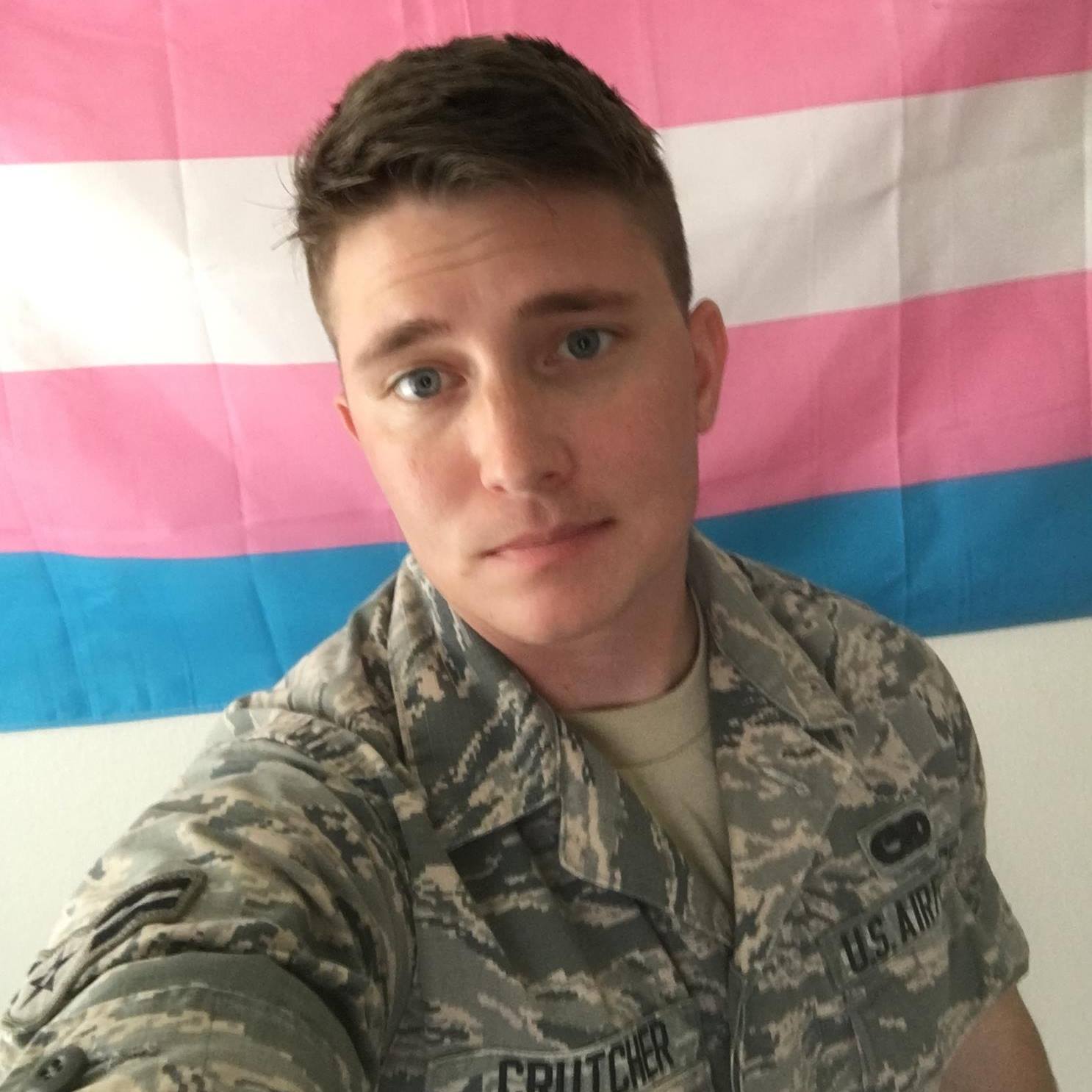 Senior Airman Sterling Crutcher always had a desire to serve.  As he watched an older sibling sign up right out of high school, he knew that he’d end up in the military too.  Somewhere along the way, he let outside influences pull him off course and he ended up working odd jobs until he was 25 and was asked why he never followed his dream.  He didn’t have a good answer and a few days later he was speaking with a recruiter.

Sterling had been in the Air Force just a few months when he got tasked to deploy to Southwest Asia in 2016.  He fit right in and was having far and away the best experience of his career.  However, unbeknownst to his deployed peers, Sterling had begun the process of transitioning just before deployment and was still serving under female regulations as he worked towards meeting male standards.  He made sure his chain of command knew what was happening and received their warm support; they began immediately using male pronouns for him.

A few months into the deployment, a senior military medical officer became aware that Sterling was transgender and ordered him sent stateside immediately.  His leadership was furious, telling Sterling over and over again what an asset he was, and couldn’t understand why they were losing this bright Airman that had done nothing but good for them.  His Squadron Commander fought for him to stay, but was unable to prevail.  Sterling was crushed; he was ashamed at being ordered home.  Even though it wasn’t his choice, he felt like he was abandoning his unit.

Asleep in the passenger terminal waiting for his flight home, Sterling was awoken by his Chief telling him that the Commander had come to see him and was waiting outside.  Sterling popped right outside, came to attention, and saluted as he watched tears flow from his Commander’s eyes.  The Commander apologized to Sterling for everything that was happening, told him about all the wonderful things his supervisors had to say about him, and let him know that he hoped Sterling would get the chance to come back.  He reached his hand out to Sterling he said “Don’t be too hard yourself, it is not your fault.  If you ever need support, you have mine.”  As Sterling pulled his hand away, he found himself in possession of the Commander’s Coin, a tradition of recognizing excellent performance in the military.  At that moment, Sterling knew he would fight to continue serving no matter what stood in his way.

When Sterling returned home he was approached by a national news organization doing a story on transgender people in the military.  He was worried that he’d be prevented from participating by his home command, but the exact opposite was true.  They were just as impressed with Sterling as his deployed leadership had been and provided a Public Affairs officer to work with Sterling and help him prepare for the interview.  They helped Sterling approach the interview the right way and be sure of what he could say.

After the interview aired, people on base were frequently walking up to him for a handshake and to let him know he had their support.  To Sterling those simple gestures were incredibly meaningful and kept him going on some of his darkest days.  They were constant reminders that he wasn’t alone in any of this.  The support also fueled him; because of it Sterling said “I work hard every day to prove that just because I am trans, it doesn’t make me any less an Airman.”

In 2018, serving openly and proudly, Senior Airman Crutcher deployed again. During an extremely successful 6 months where he was recognized as one of the most competent Crew Chiefs, he earned 3 more coins from his Group and Squadron Commanders.  In January 2019, Sterling returned home to his pregnant wife.

Q & A with SrA Crutcher

A: I am striving to attain my Ph.D in Clinical Psychology and become an officer in the Psychology Field. I am applying to the Uniformed Services University, which is the military medical school. One of my recommendations actually comes from my own mental health physician who oversees my transition plan. He told “I would make a great asset and be of great help having gone through the process.” I am taking the GRE for med school and  am putting my ducks in a row to have my application in by the next deadline, Dec. 2019. My hope is to be able to help military members in all aspects and assist with those coming out and taking their transition journeys.

A: I would be lying if I said this was all easy. Coming out, facing discrimination and hate, and dealing with an unknown future is not at all easy. Every day is a conscious effort to keep going and keep fighting. I like to believe I have grown stronger as I work on myself. In 2018, I started reading books by Buddhist monks. These books helped me realize that I can live with my suffering and pain and use it to water my spiritual garden for the better. This has brought me into a mindful way of living. It has also helped me become a more loving and compassionate human being. Living mindfully has brought me to a place of peace in the face of adversity.

A: I feel there is a lot of stigma in being transgender in the military.  Almost as if they think we’re acting out to get attention, instead of seeing the person before them. People often say to me “You don’t look trans”.  It’s as if they expect to see me with long hair and feminine features in a male dress uniform. They often wonder if I am even able to meet standards or if it is harder for me to meet the standard. There is little understanding or caring about the individual. If I had to tell people one thing, it would be to focus on the individual and not the image society has thrust upon them.

A: Continue to be a voice, and advocate for those who don’t have a voice for themselves. Be compassionate to be everyone, no matter what they say or believe. This is how you drive change.