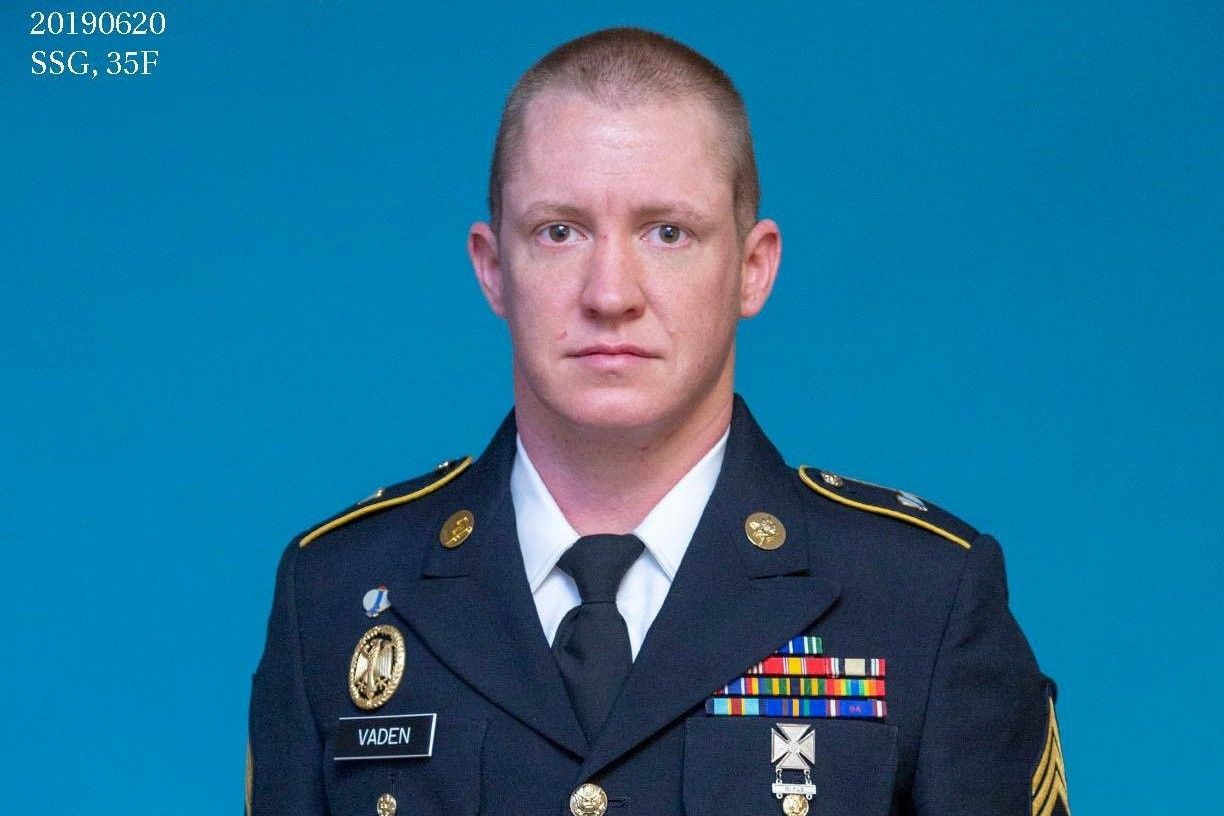 Staff Sergeant Mak Vaden, currently an Intelligence Analyst and Human Intelligence Collector in the Georgia Army National Guard, is a case study in knowing yourself and working hard to become the person you know you can be.   Mak knew two things about himself from an early age; what he was most sure of was that someday he would be a soldier and he would do anything to make that happen.  Growing up in Belmont, North Carolina he was raised in a home where emphasis was placed on completing college first, however after his first year he could no longer wait to realize his ambition.  He joined the Army Reserves at the age of 18 with the intention of completing college while serving in the reserves and then going active duty.  It quickly became apparent how much he had fallen in love with the Army so that after completing basic training and advanced individual training he transferred to active duty.

The second thing he knew early on was that something was different about him, but full self-awareness of what that was would take a while to bloom.  Around 8 years of age, Mak learned about transgender people the way many who came of age before the prevalence of YouTube, Reddit, and Social media: daytime talk on TV.  Mak was home sick and watching Oprah with his mom.  The episode they watched featured several male to female individuals with their partners sharing their stories and Mak remembers not fully understanding, but somehow connecting with what they were saying. At 16, he came out to his family as a lesbian since he knew he liked women and as he describes it “being an anatomical woman at the time”, he just assumed that was the “something different” feeling I had growing up.

As an adult, Mak began dating and gained a diverse group of adult friends and coworkers.  Exposure to these broader horizons led Mak to the realization that there was something more to him than just his sexuality that was ‘different’. At 25, introspection and self-understanding became more of a priority for him than going out with friends and staying busy with work and he finally came clean to himself about being transgender. Mak began the journey of transition a couple of years later after doing some research and connecting with the community, including joining SPART*A in April 2018.

Though Mak considers his physical transition complete, there have been many challenges over the past few years. The list of indignities Mak experienced, ranging from annoyances to serious administrative battles, is lengthy.  Mak had to explain his situation to less than understanding and professional people, faced “pee anxiety” over urinalysis tests, had to use the “correct bathroom” according to how the military recognized his gender despite physical changes, overheard negative remarks about transgender service, and dealt with ongoing administrative battles to get his gender marker changed as he was the first for the National Guard in his state to do it and was the ‘guinea pig’ for figuring out the process. Through it all he grew stronger, more resilient, and learned a lot without ever losing faith in the Army or the country he serves.

When Mak graduated from the Army Enlisted Senior Leader's Course in November of 2018, he was the distinguished honor graduate.  At the end of the course, he came out to the class as transgender. He had waited so that his classmates would already know him and had seen what he was capable of without any preconceived bias before they had a discussion about it. After graduation. several classmates approached Mak and told him that sharing his experiences opened their minds and influenced their perspective on transgender service in a positive manner.

Mak resiliently took the slings and arrows of prejudice and now uses his experience to educate and open the minds of others. He recently became an instructor and taught a course for intelligence analysts that normally has a high attrition rate for the students because of the difficulty.  Mak’s class had an unprecedented 100 percent graduation rate which brought great distinction to his unit.  Mak credits the resiliency and creativity he gained over the past couple of years through coming out and transitioning.  He said those skills “played a major role in my ability to adapt and contribute to the mission of producing new intelligence analysts for the National Guard.”

In a accomplishment that meets one of his major career goals, Mak recently was accepted by the Military Intelligence Component to be a Warrant Officer and will be going to Warrant Officer School at the end of June 2020.  As a Warrant Officer, he hopes to continue using the skills he's developed to create a better and more understanding culture within the military for transgender people already in the service and those who hope to someday join.

Q & A with Mak Vaden

A: I joined the military at age 18 in 2006 because I wanted to serve my country. Being a soldier had always been a dream of mine and one of the only jobs I was taught about growing up that I knew I had a passion for. Family legacy was also a contributing factor. I have relatives who fought in the Revolutionary War, World War I, World War II, and the Vietnam War so it was also a point of continuing that family tradition of service to country that also contributed to my decision to serve.

A: My primary career goal is to become an Intelligence Analyst Warrant Officer and eventually retire.   I hope to stay in as long as I can until I hit the maximum age limit at which point I hope to have acquired a Master’s Degree  in Emergency Management and find a job in which I can serve my community somewhere in the first responder or FEMA realm.

(Note: This Q&A was conducted before Mak was accepted to Warrant Officer School)

A: Not to sound cliché but I am a big believer in “hunting the good stuff”. No matter the situation or circumstance there is always something to be gained or learned from it. Sometimes it’s just a matter of adjusting ones perspective or being open to other’s perspective to find silver lining when things aren’t going the way we hoped they would or planned for them too.

A: That we are people. We love, hope, fear, bleed, cry, and have all the human experiences just like any other person and are deserving of the same respect, dignity, and opportunity as such. Being transgender is a strength that contributes to our military might, not a weakness.  When I was at Senior Leader’s Course part of the homework was to watch TED talks and comment on them, as well as other students comments. One of the TED talks addressed diversity in the military. One of my classmates who also happened to be the only person of color in the class made a comment that I couldn’t have agreed with more in that when you have to face each day knowing you will be exposed to those with certain biases or predisposed notions about the community you come from it creates a distinct source of drive to do better than your best in order to dispel those notions and be a good steward for/representation of your community in addition to your individual drive to give it all you have and be a team player. This, among many other reasons, is why diversity gives us strength as individuals, as a team, and as a military.

A: Speak up and stand up for us.  Most of us are familiar with the phrase “complacency kills”. This phrase, though usually applied to combat is just a relevant for being an ally or advocate. Sitting back when people are promoting disinformation, or simply reinforcing negative biases is enabling it and “killing” the progress we have made in dismantling those biases and creating an environment of cohesion and esprit de corps. It can also “kill” rapport when it comes to personal and professional relationships because as Dr. Martin Luther King said, “In the End, we will remember not the words of our enemies, but the silence of our friends.” Don’t be complacent, speak up and speak out!

Q: Anything else you want people to know?

A: Volunteers! Send Me!