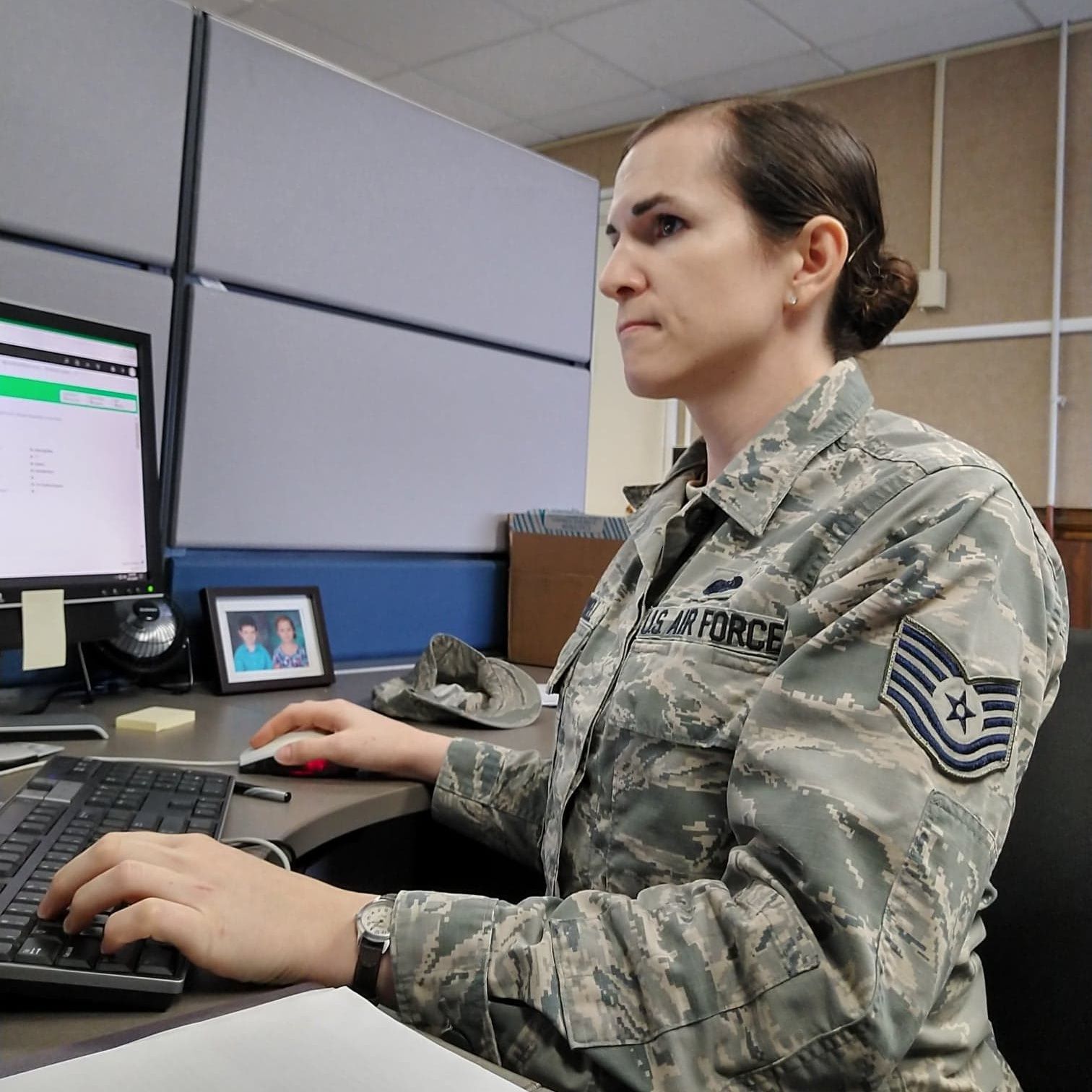 Sometimes all it takes is a little leadership.  After Technical Sergeant Katherine Caldwell came out as transgender most of her co-workers made nothing of it and went right on working with her as though nothing had changed.  Before and after, she was just TSgt Caldwell and a valued member of the team.  However, there was one person who just didn’t get it.  That person went out of their way to make sure Katherine knew their level of disdain, throwing a fit about her pronouns to anyone that would listen.  Seeing what was going on, her Deputy Division Chief pulled the person aside for some corrective action.  He made it clear that it wasn’t TSgt Caldwell that was causing an issue in the unit, it was this person’s unprofessional activity. The issue ended right there.  Summing up the situation, Katherine said “With good leaders that set expectations, we can focus on the mission rather than letting people's biases get in the way.”

Katherine loves what she done during her 17 years in the Air Force.  She’s a specialist in Radio Frequency communications currently assigned to the headquarters of Air Combat Command on Langley Air Force Base.   Working on the headquarters staff gives her an outsized impact on the future operations of the Air Force.  She recently ran an Air Force working group to plan the modernization of HF radios that will enhance the resilience of airborne networks.  The output of her group will develop communications techniques and technologies to help ensure that when the Air Force operates in contested environments it can dominate in the frequency spectrum domain.  With her mind focused on the future, Katherine says “I spend a lot more time thinking about the mission than the fact that I am transgender.”

Looking at her performance reports, the first 13 years of TSgt Caldwell’s career reflect outstanding achievement, but she felt a weight around her neck that served to hold her back somewhat.  She felt a need to control people’s perception of her so as to not give away who she really was.  Lose control for even a moment and that constant risk of losing her career, a risk that had nothing whatsoever to do with her performance, could be realized.  Since the policy changed, Katherine has been able to be herself at work and the only perception she has to worry about know is the evaluation of her renewed spirit and focus on the mission.

With less than three years to retirement, Katherine is hearing the call of a family that has been through a lot.  Her kids have handled a number of moves with her, including three countries, and she’s looking for some stability.  It hasn’t been all bad though, one of her fondest memories is the hike she did to the top of Mt. Fuji in Japan.  She’s passed that love of the outdoors onto her kids and they recently completed a nine-mile hike. When retirement from the Air Force does finally come, she hopes to have a bit more time to focus on her guitar, outdoor sports, and volunteering.   Until then, she’s committed to giving the Air Force everything she’s got.  She said “I love that I can do this (work) in an environment where my gender and status as a transgender person doesn't get in the way while working on the requirements and solutions to support the warfighter!”

Just as her Deputy Division Chief set the expectations that allowed Katherine to flourish, Katherine now sets the expectations for future tactics and technology that will allow the Air Force to fly, fight, and win across warfighting domains.  No bias will get in the way of that.

Q & A with TSgt Caldwell

A: I joined in October 2001. When I graduated highschool I didn't really know what to do. My grades were mediocre and the apeal of doing something more interesting than working an entry level service job was really appealing. I nearly joined the Army because I really wanted to fly helecopters, but the apeal of the Air Force won me over and I joined what was Satellite Wideband and Telemetry Communications at the time. I was in the delayed enlistment program when September 11th happened. At the time I remember thinking that it looked like I would have some work worth doing ahead of me.

A: I will spend the next three years being the best NCO I can be. Once I get out I plan on working in business in a way that lets me continue to have a positive impact. Right now I am working on my MBA in IT management with WGU. Outside of the military I see how businesses can make a large impact on people and our nation. I wanted to learn the business skills to augment what I have learned in the military. Working with the companies that help us keep our technologies at the cutting edge really helped me learn what some of those possibilities could be.

A: This has been a challenge for me. I was really afraid when I first started and that fear ate at me more than anything. One day I put a trans pride sticker on my truck as a way to put myself out there and I found that it really helped. That is when I learned that for me, the best way to face fear is to walk up to the thing I am afraid of and stand my ground. Now I almost get a kick out of facing my fears. I used to hate rollercoasters and heights, so I went skydiving a couple years ago.

One of the things I do is that when I have a challenge that seems impossible I just try to identify any action that will take me one step towards defeating the adversity and I work on taking it while trying not to stress about the larger problem.  If I just keep fighting in the right direction, I tend to get where I want to be; even if it wasn't where I thought I wanted to go originally!

When I have particularly bad days I will spend more time with my music or take my bike onto some of the more intense trails in the area.

A: This is simpler than people seem to be making it. Transition is relatively simple medically, legally and socially compared to how it has been treated from my experience. Give me quick straightforward access to care and transition related processes and let me get back to my job. This might just be my opinion, but we are here serving, we don't want this to be a giant issue and we just want to be ourselves so we can focus on our mission. Transgender service ideally should have been a quiet easy thing with little bureaucracy, but due to cultural realities it has been a fight. These realities have also made the current processes much more bureaucratic than needed.

A: I think one of the most powerful things allies can do for transgender service members and transgender people in general is to help normalize trans people within society.  Allies can help our culture shift to one where people don't think much hearing about or seeing trans people.