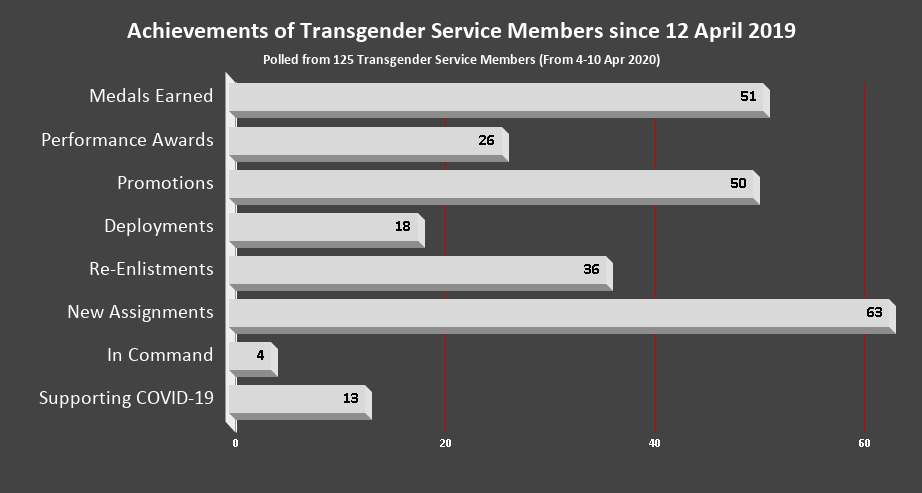 WASHINGTON, D.C., April 11th — One year ago, a ban slammed into place that prevented transgender Americans from joining the military and denied access to medically-necessary care for thousands of currently-serving troops because of a belief that the military “cannot be burdened with the tremendous medical costs and disruption that transgender in the military would entail”. However, it left approximately 1,600 Soldiers, Sailors, Airmen, Coast Guardsmen, Space Professionals, and Marines exempt from the ban. Every day, those service members show just how wrong that belief was and continues to be.

Despite the ban, transgender service members meet and exceed the demands of the military. A survey conducted in the past week by SPART*A of 125 transgender service members found that 18 of them deployed, 50 were promoted, 51 medals were awarded, and 26 received quarterly or annual performance awards - all since the ban went in place on April 12th, 2019.  Additionally, in that time period, 63 received a new assignment, 36 re-enlisted, and 4 served in command positions. Many more received letters of appreciation, increased their responsibilities, or were ‘coined’ (a recognition of achievement) by senior officers and enlisted leaders.

The commitment of transgender service members to be their best selves, even as others attempt to declare them unfit, remains unwavering as does their commitment to serve our nation. “I am consistently impressed by the quality and caliber of our members, who prove time and time again they not only belong, but lead from the front and succeed,” remarked SPARTA President and Chair, Emma Shinn, who serves as an active duty Captain and Judge Advocate in the Marine Corps. SPART*A highlighted many of these members in a series on our Facebook page titled “Despite the Ban”.

Today, as the global battle against COVID-19 rages, transgender service members are on the front line of that fight too. 13 of the 125 polled by SPART*A are directly supporting COVID-19 relief and recovery as medical professionals, logisticians, security forces, and administrators.  “As military officers, we understand the risks and necessity of sending troops into harm’s way,” said Bree Fram, SPART*A’s Communications Director and an active duty Lieutenant Colonel in the Air Force, “but this feels different as we send them to fight an enemy they can’t see. We’re so proud of their willingness to put their lives on the line to support the people they swore to defend.”

Even with the spotlight on the accomplishments of the 1,600 troops able to serve openly, thousands of transgender service members serve in the shadows, unable to do more than declaring they are transgender. Denied medically-necessary care by an arbitrary deadline, these individuals still serve proudly each day.

Asked about this mostly-hidden group, Blake Dremann, SPART*A Treasurer and an active duty Lieutenant Commander in the Navy, remarked “We must acknowledge their strength and dedication to the cause of open service. These members sacrifice their true selves in order to serve because seeking medically necessary care would declare them unfit.”

Evidenced by their performance and accolades, transgender service members are some of the best our nation has to offer. They continue to stand on the front lines, deployed around the world, or supporting operations at home. They change hearts and minds through demonstrated excellence and wield the weapon of education to work for a renewed era of open transgender service.